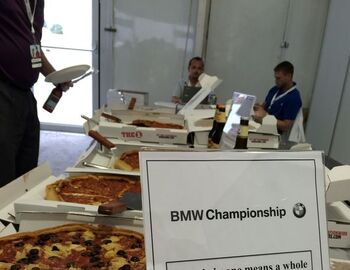 Jordan Spieth is taking the golf world by storm. He is young, talented, and winning the respect of golfers, both new and old. While playing at the BMW Championship in Chicago on Friday, he made his second career Hole-in-One on hole #2 at Conway Farms Golf Club.While an Ace in itself is something to be admired, what happened after the round was just as amazing.

Spieth went above and beyond in keeping with the age old tradition of buying a round of drinks with an Ace. On Friday night, Spieth sent 20 Deep dish Pizzas from Chicago's famous Giordano’s along with 8 cases of beer to the media tent. He also sent deep dish pies to the volunteers.

We can’t wait to see what the outcome of this weekend’s tournament will be, and we look forward to seeing what the future has to offer for Jordan Spieth, who with one gesture, won the respect of Chicagoans everywhere.